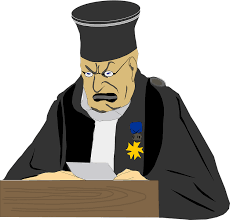 Nigerians are acting surprised that the State Security agencies have raided the homes of supposedly corrupt Judges and that they have found incriminating cash loots in their houses, and cash stashes in several bank accounts, under different names Surprise! Surprise! Indeed! I Wish has this happened earlier and that it continuously re-occur? My only shock is that this seems to be of little consequence to the average Nigerian. We have heard even worse before? No! Nothing could be worse than corruption in the highest place – the Courts. How can a Judge seat in judgement against others accused of even lesser crimes than that of which he’s guilty; how can he even dare to pronounce judgement. This is the worst kind of evil, that for money a judge would deal injustice, denying the just their natural recompense.

Are some Nigerian Judges corrupt? Yes, without a doubt. The scent of corruption from those exalted halls is more than a whiff. It is the full blown smell of a rotten roadkill.

We need to pay close attention to the Judiciary. There are too many innocents suffering injustice while the guilty and rich go scot free. That being said, the law is still an ass; the procedures of gathering evidence can make or mar the prosecutor’s case. Mind you, at the end of the day the case is still going to end up before a, very likely, sympathetic Judge who could be closing ranks with his peers and battening down against those who dare assail their mighty fortress of corruption. The prosecutor’s team need to exercise caution and ensure that due process is followed in routing out the corrupt Judges.

A corrupt judiciary is a bad social product. It’s business deterrent when you can rely on the courts to settle legal disputes. It damages the country’s image and makes bad selling point for foreign investors and tourists. It purveys violence: no need to go to court and waste your time, why not just do harm to your enemy as payback and forget your loss?!